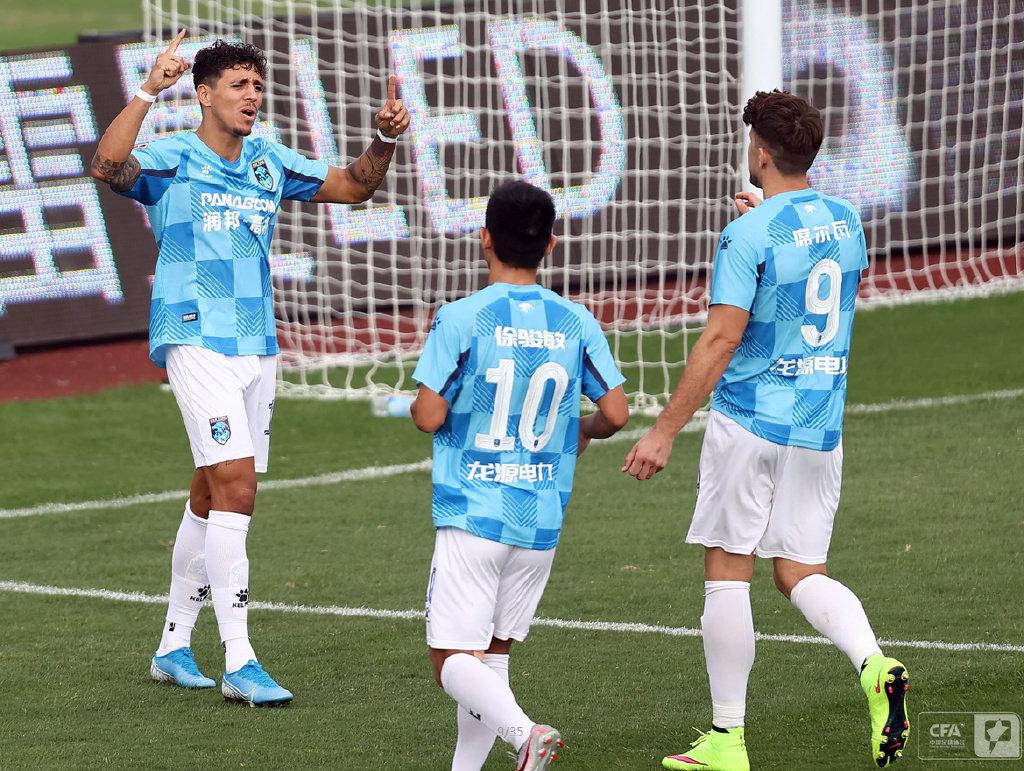 The match between Nantong Zhiyun and Xinjiang Snow Leopards was kicked off by the opponent's Nur Maimai with a stunned long-range shot. Fortunately, Nantong Zhiyun's goalkeeper Shi Xiaodong focused his attention. In the 11th minute, Zhi Yun's new foreign aid Chagas made a precise pass. Nan Yunqi was singled out in the penalty area. Chagas made a penalty kick and scored his first goal in Zhi Yun. In the 42nd minute, Xu Junmin sent a precise pass and Chagas headed for another victory. In the second half, Zhiyun gave Xinjiang a penalty with a handball from the restricted area. In the end, Nantong Zhiyun won the Xinjiang Snow Leopards 2-1.

Just looking at the score, Zhi Yun should have the advantage, but in fact the Xinjiang team occupied most of the ball time. Unfortunately, the players were not in place in the details and were not patient enough. It was difficult for the ball to get into Zhi Yun’s penalty area. Especially the first half was mostly long shots. On the contrary, although Nantong Zhiyun was passive on the field, he played vigorously and made full use of the opportunity of positioning and out-of-bounds kicks. Nantong’s first goal was a counterattack, and Chagas accurately found Nan Yunqi through the pass. The latter swayed the goalkeeper to make a point. The second goal was actually a two-person match near the boundary. Xu Junmin sent a subtle pass to win. In addition to these two goals, Zhi Yun has also made many long passes or through-threat balls in the backfield. It has to be said that Nantong Zhiyun’s tactics are simple and pragmatic, playing behind the opponent, using the excellent technology and height advantages of foreign aid, the effect is significant.

The premise of counterattack is defense. In this game, Zhiyun's defense was very well done. The only loss came from a penalty kick, and handball was also caused by subconsciously opening his arms near the baseline. It was not a loss in a sports game. I believe this is the same as the coach Xie Hui usually defends. The requirements are inseparable. At present, Nantong has only lost 2 goals after 6 games in China, which shows its defensive skills. It can also be seen in this game that the Xinjiang team has the advantage in possession of the ball, but no matter how they conduct the ball, there will be a cloud of people directly on each point. If the ball is lost in the frontcourt, Zhi Yun also counters the spot first. When the opponent takes the ball with his back from outside the penalty area, Zhi Yun's players will go up to help defend. In the second half of the second half, Xinjiang's physical fitness dropped. Nantong team could also use their physical advantages to press out to create a few opportunities. The whole play is clever and pragmatic, and it is still quite practical in the Chinese League.

'S coaching at Nantong Zhiyun was the first stop of Xie Hui's career as a head coach. Last season, Nantong Zhiyun won Qingdao Huanghai in the last away game and succeeded in thrilling relegation. In this season, Xie Hui has been in the team for more than half a year. The changes have begun to bear fruit, especially on the defensive end. The defensive rotation of personnel is very clear. clear. In addition, the goalkeeper Shi Xiaodong on loan from SIPG is also very distinctive, with a large defensive area and concentrated attention. This is not unrelated to Xie Hui's coming out of SIPG's assistant coach. The main players, including Wei Lai and Xu Junmin, are from Shanghai Shenhua or SIPG, and a pass is still very practical. And the coaching experience Xie Hui learned from the famous coach is a very good practice in the Chinese Premier League.

For Xie Hui, what still needs to be solved is the offensive problem. Zhi Yun only scored 4 goals in the previous 5 games. It can also be seen that the offensive is weak. This may be one of the reasons for his pragmatic defensive counterattack tactics. The newly introduced foreign aid Chagas scored two goals in this game not long ago. In the future, it is very likely that the main force will be stable. This season, the five new teams from China B are temporarily substituted into China League A, which also reduces the strength of the entire China League A. However, this is also a good opportunity for some veteran China League A teams to surpass. The current group schedule is halfway through, Nantong Zhiyun is able to make some changes and routines on the offensive end while doing a good job of defense. In terms of group qualification, it is still possible to compete with the two strong opponents of Changchun Yatai and Kunshan FC. .