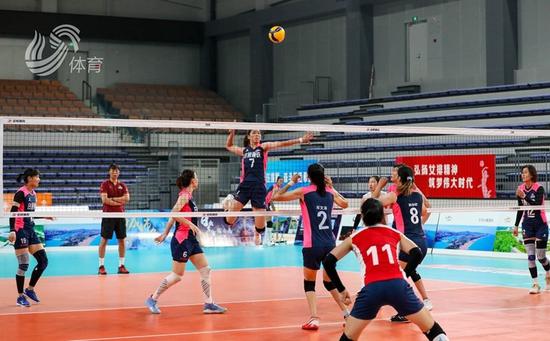 In August this year, the Shandong Women's Volleyball Team officially moved their home stadium to Rizhao, and the team also won a new title-Shandong Rizhao Steel Women's Volleyball Team. In recent years, the Shandong team, which has always insisted on playing in the All-China class, has achieved the goal of training the team well. A group of national team members such as Wang Mengjie and Yang Hanyu have emerged. Young players such as Zhang Qian and Sun Jie are not there. few. In the national women's volleyball championship that ended in early October, the Shandong women's volleyball team entered the final with a record of victory, but eventually lost to the Tianjin team and won the runner-up.

The opponent of the Shandong Women’s Volleyball Team, Guangdong Evergrande Women’s Volleyball Team, won the fourth place in last year’s league. Although this year’s championship record was mediocre, with the addition of foreign aid Labad Teyeva and Robinson, Evergrande’s women’s volleyball team’s Strength should not be underestimated. It is understood that due to the US main attacker Robinson is still in isolation, this Rizhao match will not appear, and Bulgarian star Rabad Teyeva will play.

At the beginning of November, the new season women's volleyball league will start, and all teams are seizing the time to prepare for the game. In order to better train their players under the competition system, some young players from Shandong women's volleyball team will be loaned to other teams to play. This includes three players on loan to Guangdong, including Guo Huizhen. They may face the old players in this game.

"We are still based on our own team's performance, including in response to some of the problems exposed in the championship, we hope that the players can improve their own resolution and resilience through the game." Speaking of the match against the Guangdong team, Shandong women's volleyball coach Li Yanlong still He hopes that the team will continue to improve, and for the next league, he also expects the team to have new breakthroughs. "This time the league schedule is very intensive and it is a test for all our teams. We hope to play well in every stage of the game. , First successfully rushed to the top eight, and then step by step towards the best fifth place in our team history."